3 Pints Gone plays Celtic traditional-style folk songs and sea shanties at bars, Celtic fairs and events around the country. Their distinctive sound is full of high energy and harmony-rich arrangements.

Since 2009 this group has been giving audiences across the Midwest a hard hitting, side splitting, action packed entertainment that is sure to please.

While it’s true the things we do may scandalize or stun, a little bit of something is Better Than Nun. 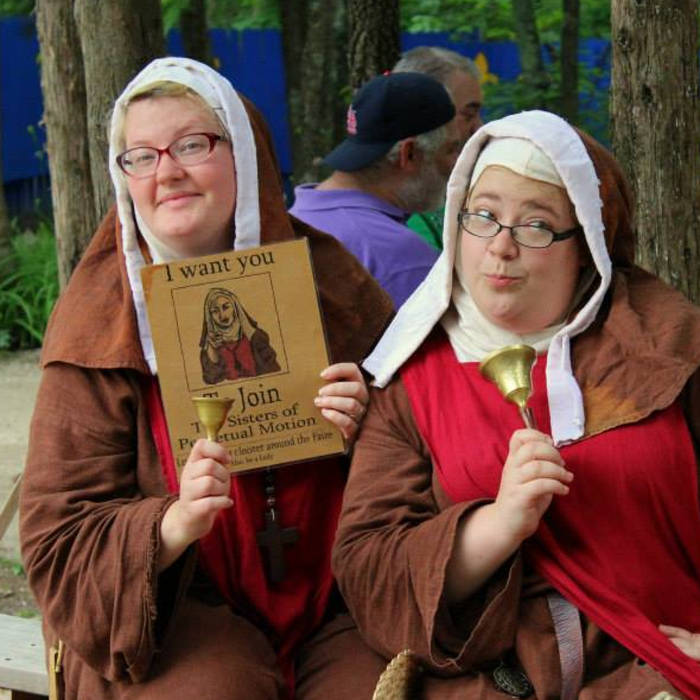 This is Coy I juggle and make people laugh, not necessarily in that order.

Featuring multiple vocalists and an array of instruments including a historic violincello da spalla, regular and bass ukulele, guitar, violin, mandolin, drums, and accordion External Combustion Orchestra is sure to be a crowd favorite! 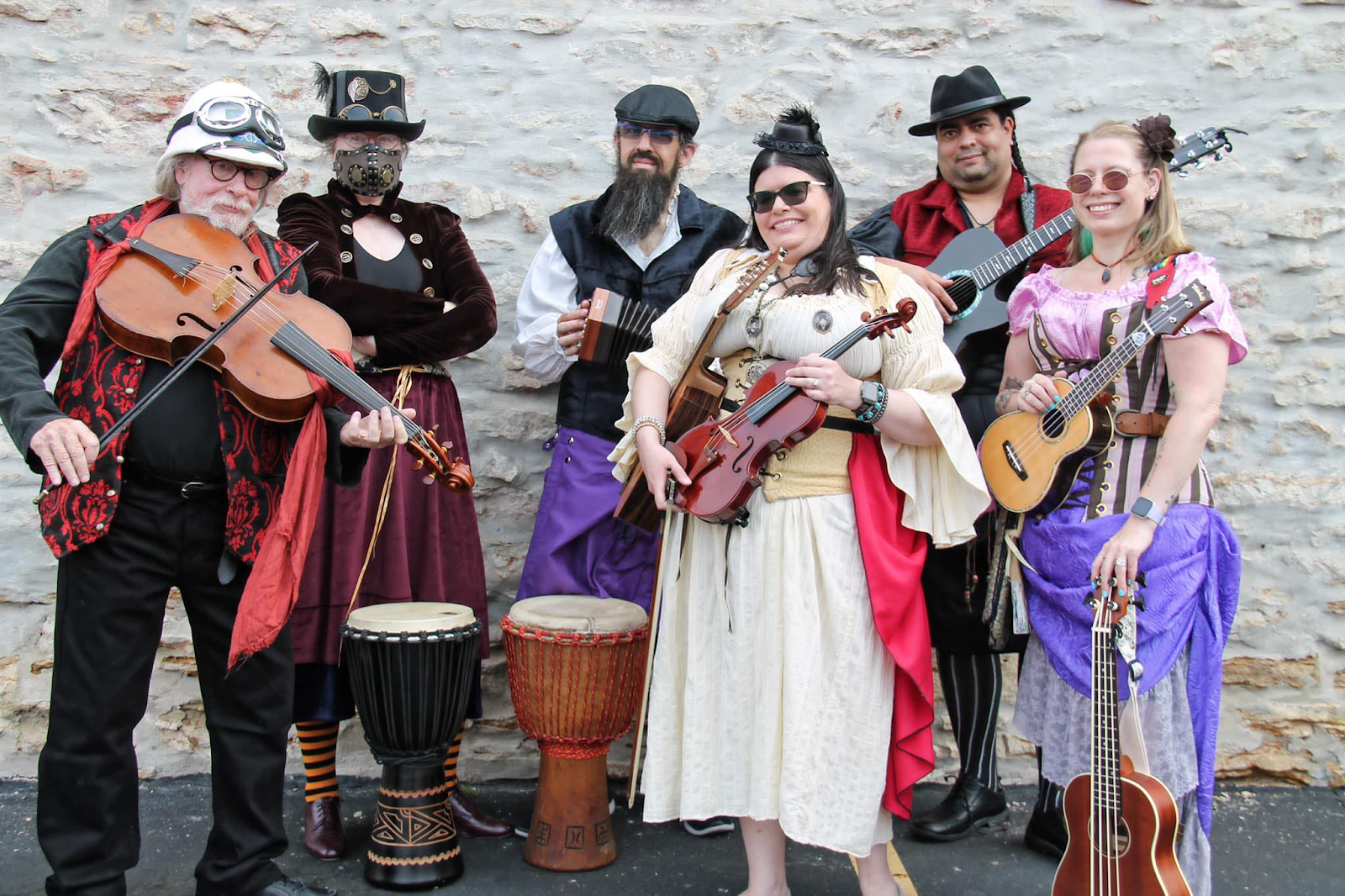 Free Company of the White Stag

Have Court, Will Travel

Have Court, Will Travel is a 16th century English royal court. – Queen Catherine & King Edward are perfect examples of living “Happily Every After”.  Learn how nobility lived, loved and played during this enchanted time.  Listen to the royal minstrel play and watch nobles dance, participate in a Q and A session on all things renaissance and have your kiddos dubbed a Knight, a Lady or a Dame.  Have Court, Will Travel will treat you royally! 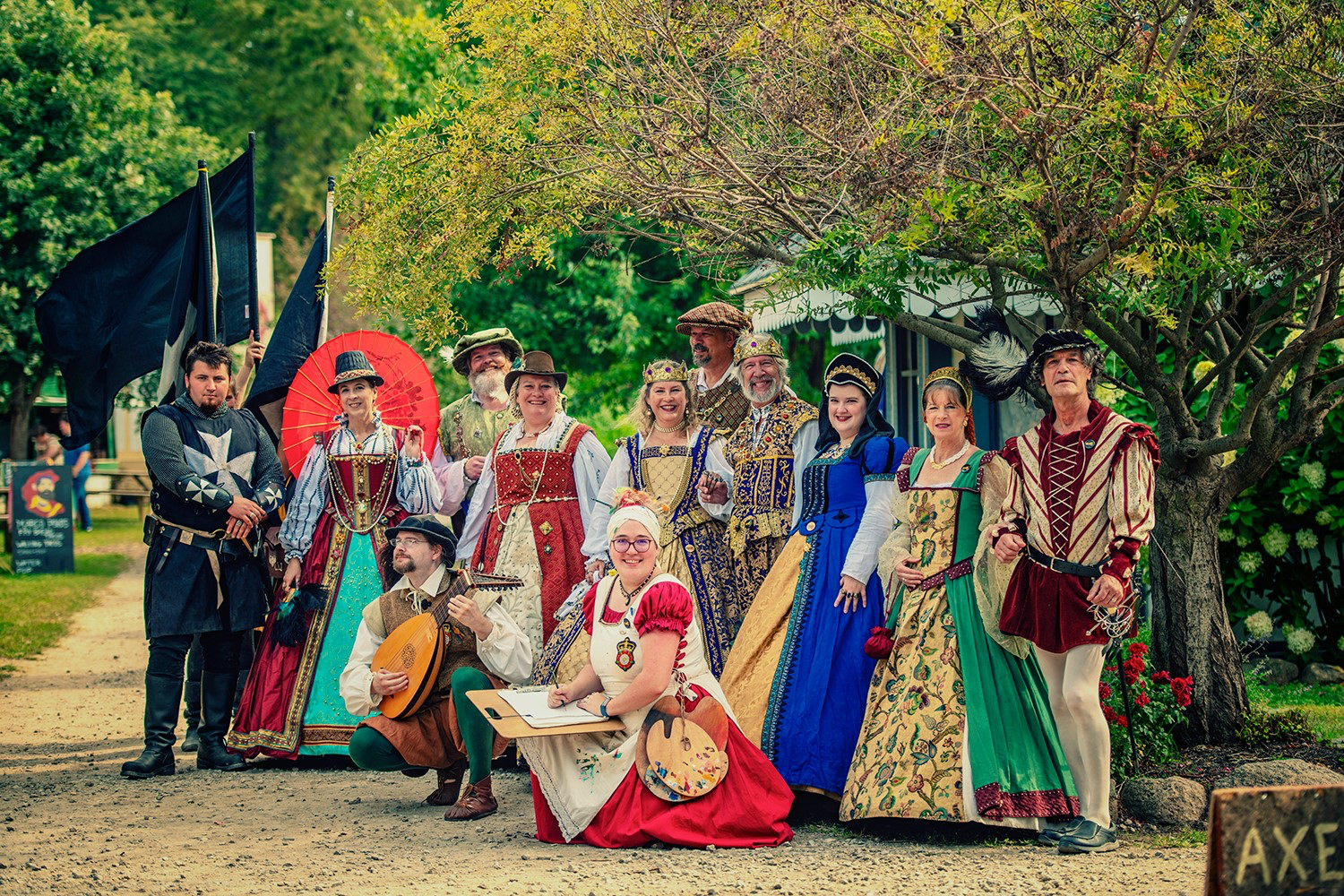 Falconer – Craig Hendee – works world wide to educate people on the art of falconry. Craig includes hawks and falcons in his interesting show!

Highland Reign – Nationally Touring Act : A Celtic Band from Indianapolis, tunes from the old country and breathes a rocking new life into them. Rock you back to the old country!

JoustEvolution is Iowa’s only professional joust team, bringing thrills and excitement throughout the Midwest! In 2006, JoustEvolution was created by stuntman Kevin Coble who has jousted professionally across the U.S. for over 20 years. His vision combines hard-hitting action with a great sense of humor to design entertainment that all ages can appreciate and love.

The performances of JoustEvolution provide spectators with amazing feats and great laughs, but they also are intended to inspire those watching in the audience, whether they be young, old, boy or girl. Our mission is to inspire others to live with passion!

A fast-paced, up close, comedic pirate circus- with the high flying, Cap’n Sylver Fyre and her crew of risk-taking madcap miscreants!

Performing feats of Magic for 1,000’s of Faire goers in 6 states for the past 32 years.  Performances are geared for the entire family, young and old.

Get ready for a zany ride with Molotov’s “Stoopid Human Tricks” Comedy Stunt Show. It is part hilarity and part stupidity as he does things that are likely to kill him, like eating fire and getting stabbed in the face with a sword. This show is rated PG (Pretty Great) by important people who know stuff about ratings. This means that if you do not like subtle innuendo, snarky comments, or blatant idiocy, it is best that you keep yourself and your children far away. But if you don’t mind such things, and want to laugh and have a great time, this is a show you do not want to miss!

A Fire Circus. Our Valkyries are the fiercest fiery warriors you’ll ever have the honor of laying eyes on. We throw down that red hot entertainment you love and bring some serious heat.

Orckes & Trolles is a high-energy, local music group that has been performing for 30 years. They sing Renaissance, Celtic, and pirate tunes in a madcap, interactive show. For more information, visit facebook.com/orckesandtrolles.

Join Capʼn Tetanus and First Mate Kitty on the comedic and entertaining adventure that is Pirate Skool! PG show for children & families

The Adventures of William and Blackjack

Paper cutting, audience participation, and student actors are just a few of the styles William uses to tell his stories. Some of the stories William likes to tell are: The Secret, Grandpa’s Castle, The pirate Story, The Dragon With The One Black Eye The ScallyWags have been pleasing audiences for over two decades. This sketch comedy troupe is a delicate balance of right and wrong. If you’re looking for historical accuracy, they may not be the group you’re looking for but they are masters of the hysterically accurate.

4 Friends doing pirate music with a lot of shenanigans! 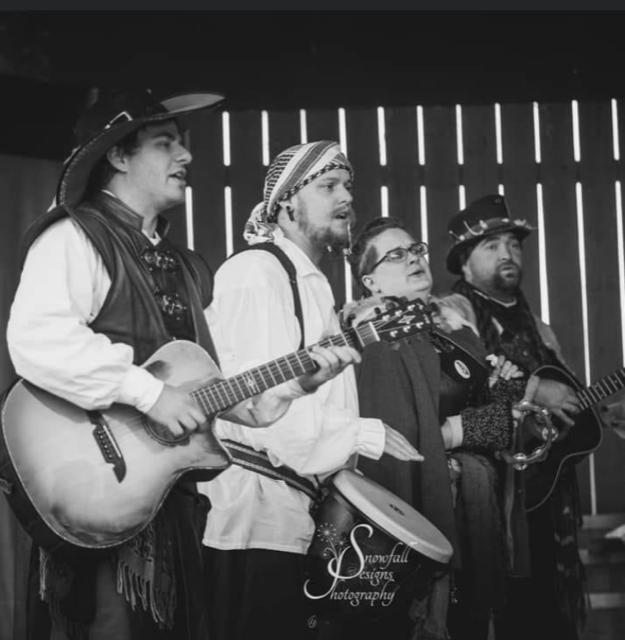 Seven Nations is not your father’s Celtic band. With a passionate, tender, and rollicking style that winningly veers from roots and folk to dance and fusion-rock, Seven Nations has earned a growing reputation as an adventurous band with a charismatic stage presence.

“Seven Nations — the name refers to the seven original Celtic nations of Scotland, Ireland, Wales, Cornwall, Galecia, Isle of Man, and Brittany — officially began in 1993 in New York City with a standard line-up of drums, guitars, and bass,” notes lead singer and guitarist Kirk McLeod. “We soon introduced bagpipes into the show, and over time the number of songs utilizing bagpipes grew until it became obvious that they were integral to our emerging sound,” says McLeod. “Most of the band members grew up playing Celtic music, and we’ve been performing original compositions since we began. Our instrumentation, and bagpipes and fiddle mostly, give us a distinctive sound and that’s what makes us different.”

Seven Nations has been touring full-time since 1994 with successful stops in Europe, Canada, Puerto Rico, and virtually every state in the US. The band has recorded a number of albums with over a quarter-million units in sales. The band’s latest album, Tales from the Eighth Nations, has been praised for “having the appeal of the original albums, yet a mature songwriting style. The lyrics are relatable, surprising, and the pipe/fiddle hooks stir a desire to listen to the album over and over.” 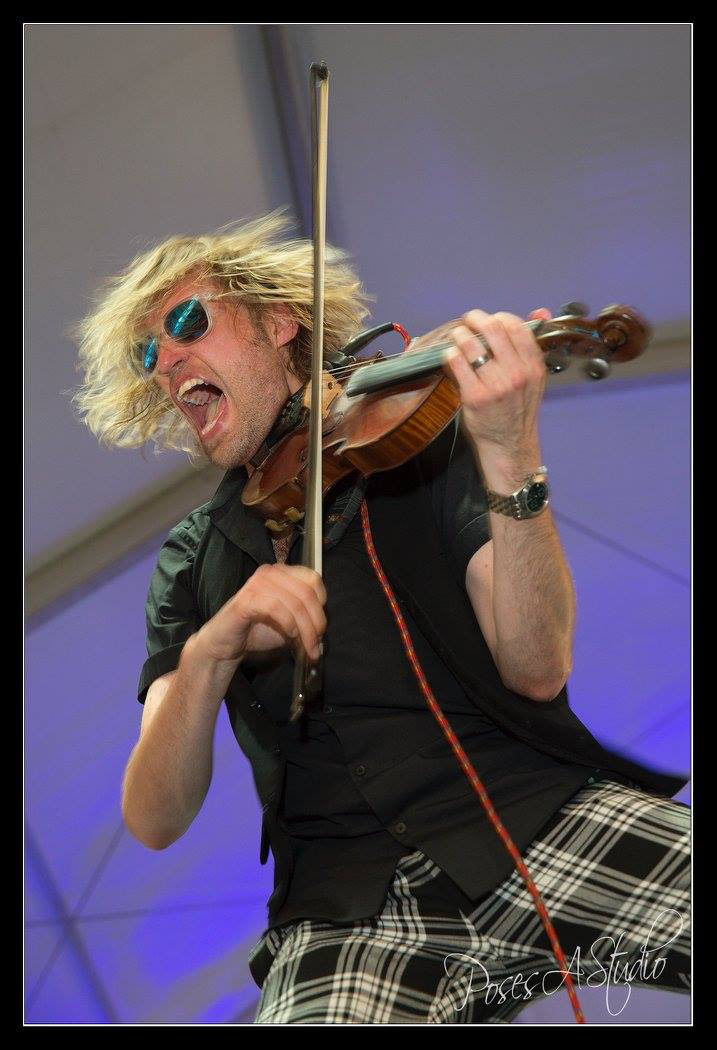 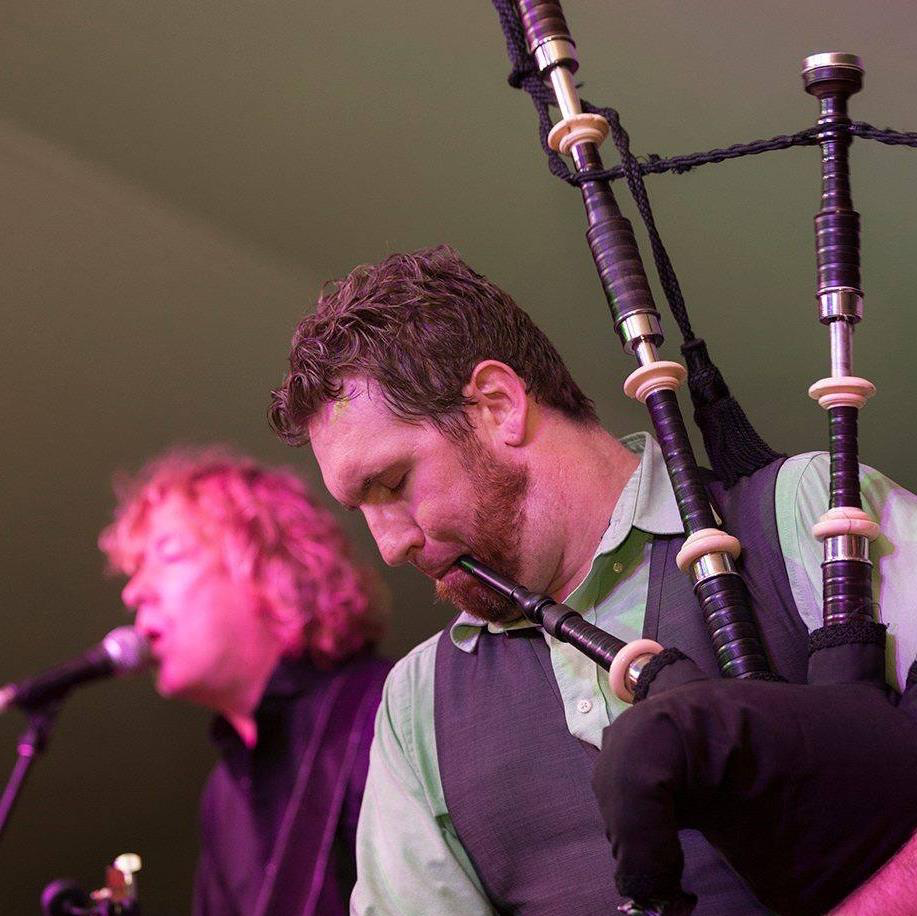 Do you hear bells? What about a flute? What about other strange noises? It might be Shaylee the Fluting Faery, musician to the faery court and pirate pesterer!

Gathering of the Sails